The OxiCool system uses the properties of a synthetic molecular sieve to boil the water in a vacuum chamber, rather than traditional refrigerants which require a high pressure compressor

Spotted: Providing air conditioning to homes and other buildings uses a large amount of energy and harmful chemicals, as well as being very carbon-intensive. Now, Pennsylvania-based OxiCool has developed a system that uses water to cool homes, containing no chemicals and offering zero carbon emissions.

Traditional air conditioners use a man-made, chemical-based refrigerant that transitions between liquid and gas, absorbing and releasing heat over and over again. In contrast, the OxiCool system uses the properties of a synthetic molecular sieve to boil the water in a vacuum chamber. The affinity of the polar water molecule for the sodium-impregnated pores of the sieve causes a phase change which draws heat away from its surroundings, cooling the heat exchanger. Once the pores are occupied, a source of heat such as natural gas, solar thermal or hydrogen is applied to release the water molecules and recharge the system for additional cooling.

OxiCool uses only pure water and contains no refrigerant. The water is contained in a maintenance-free closed loop, from which the water cannot evaporate, and the system contains no compressor, making it virtually silent. It also uses only about 10 per cent of the electricity of a compression air conditioner of the same size — a traditional air conditioning unit can account for almost half the electricity used in homes during the summer.

Ravikant Barot, founder and CEO of OxiCool, was inspired to develop OxiCool after working for Ford Motor Company in Mumbai, a region with intense heat year-round. The company has been supported by a partnership with the U.S. Navy, through grant funding and by angel investors. Barot’s hope is that as OxiCool scales up, it will not only make a major contribution to the reduction of greenhouse gas emissions but will also help reduce the massive operational burden on the U.S. electric grid.

Barot and OxiCool are not the only companies developing innovative ways to tackle the energy costs and carbon emissions of heating and cooling systems. At Springwise, we are seeing increasing numbers of innovations in this space, such as solar-powered air conditioning and a radiative cooling system.

There are currently around 1.8 billion air conditioning units in operation around the world. As global warming scales up, it is estimated that the number will grow to around 6 billion units by 2050, all increasing the use of energy, chemical refrigerants and carbon emissions. If OxiCool can succeed in developing a cleaner and more energy-efficient air conditioning system, it could inspire great changes in these areas. 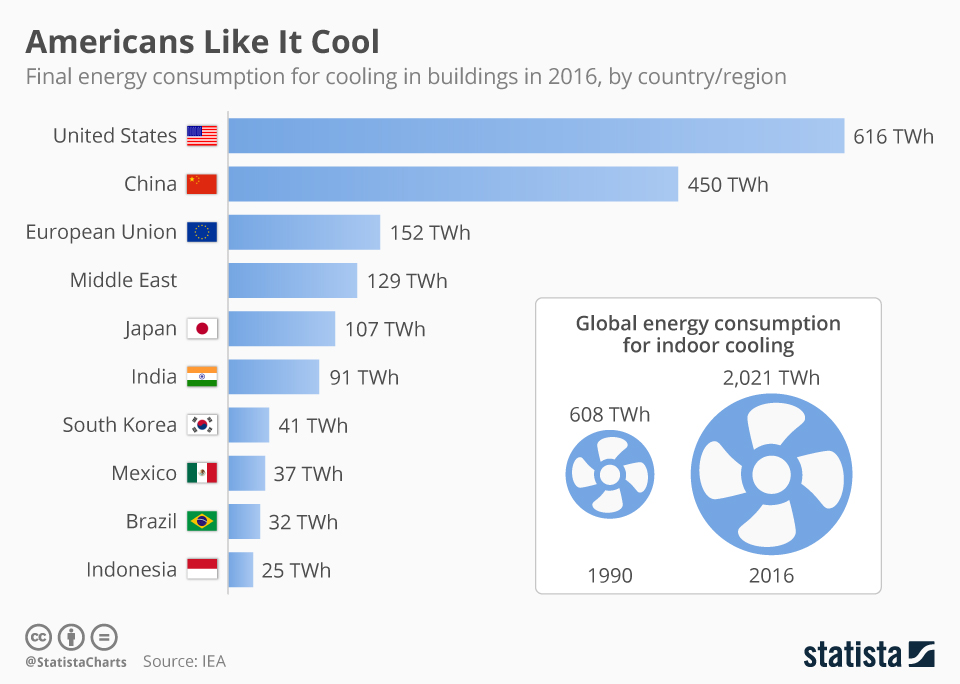 An energy-efficient cooling system based on ancient technology